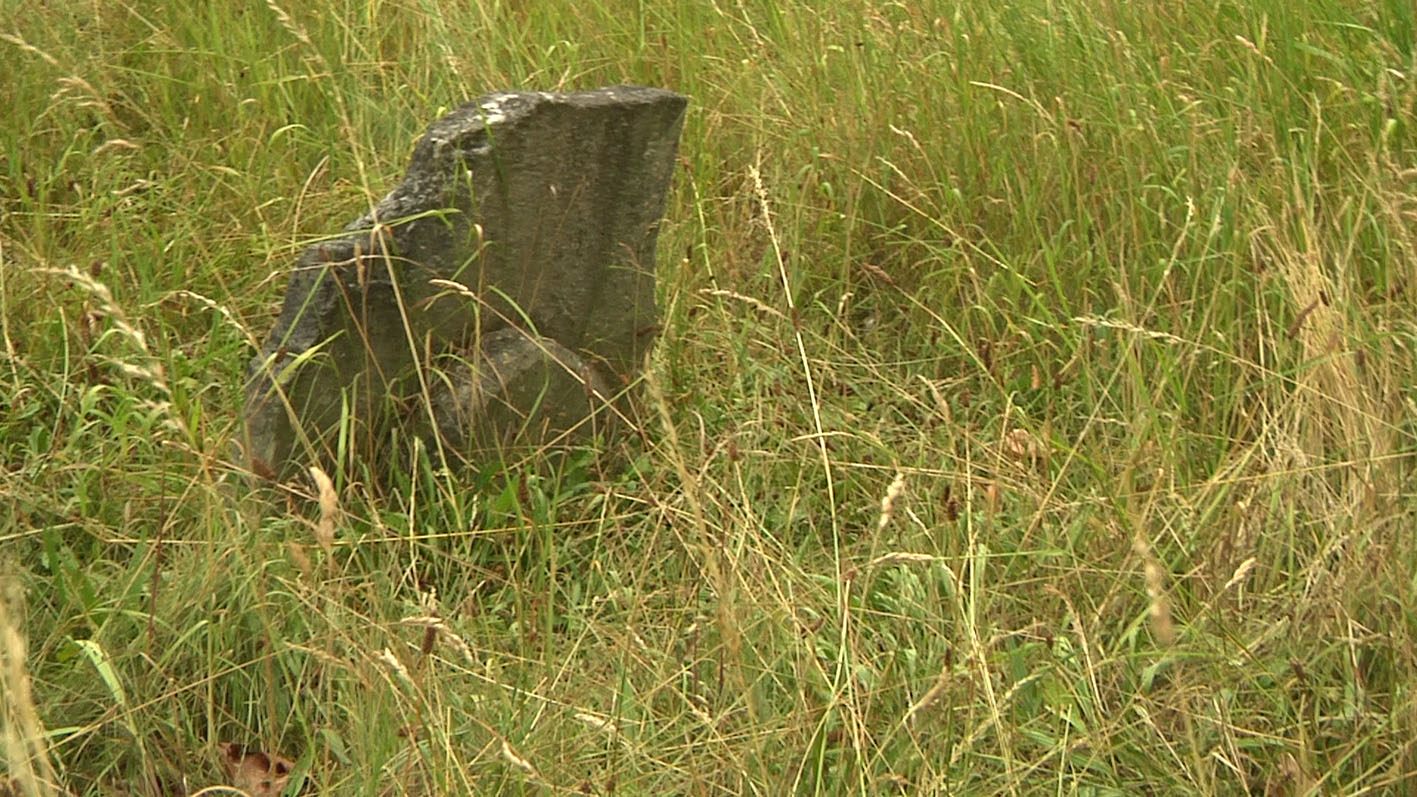 Available to rent from Filmform, Sweden.

Shots from eleven different cemeteries, burial grounds and graveyards, in Belfast, Berlin and London, are edited together to suggest that we could be looking at one continuous, single space. Long, static takes and slow pans reveal the spaces to us. We track down the long avenues between grave plots and linger on natural features: flowers, bare branches, lichen on stone. Some shots appear to be framed more as abstract compositions — silhouettes of headstones crowded around the bottom of a grey sky, branches and man-made structures intermingling. The shots combine views from different seasons and different times of day.

The necropolis is an active, teeming place, even though we push it to the margins physically and mentally; but our own city, the city where we live and work and love, is moribund, filled with buildings that are the decaying monuments of a dying social order.

The voiceover mixes original material with excerpts from existing texts (historical and theoretical pieces on architecture, landscape and art, as well as discussion of our changing attitudes to death and the dead). The texts are run together, so that the viewer is not made aware that they come from different sources: sometimes, they appear to be the spontaneous thoughts of the narrator. A personal dimension enters. The death of the city is the death of a love affair. 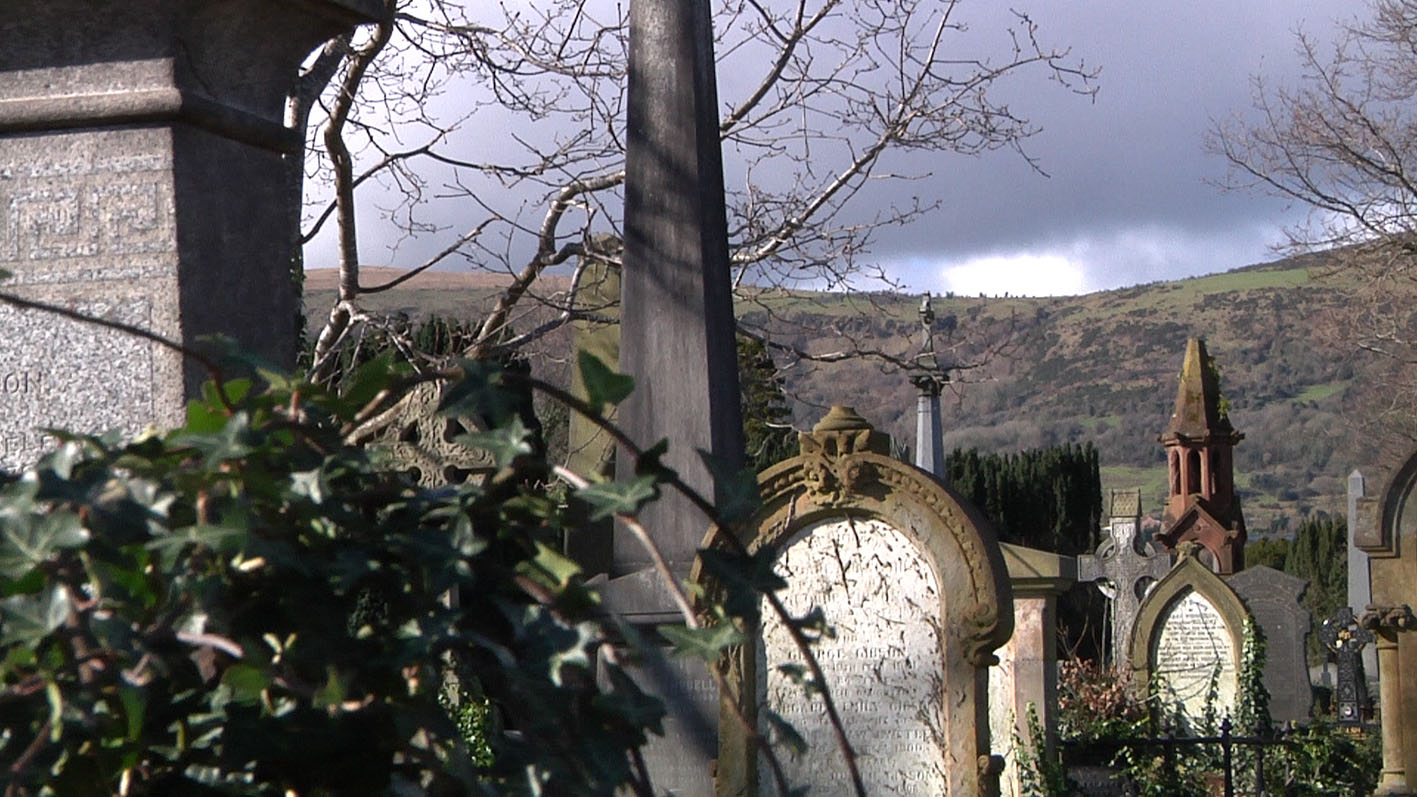 As the scene unfolds, characters start to appear in the locations, almost incidentally, at the very end of a pan or in the corner, or far distance, of a shot. These figures ‘inhabit’ the spaces filmed, performing simple, everyday actions. Gradually, as the film progresses, the combination of the voiceover material, the extent of the suggestive ‘location’ constructed in the edit, and the presence of these everyday figures normalises the spaces: it is no longer a morbid or melancholy site we watch, but one that is revealed as complex, living. Someone sits over their hurried lunch, elsewhere someone uses a laptop, a woman reads a letter.

Throughout the film, occasional views back to the city centre, in the distance, intrude: the same buildings are seen from different angles and vantage points, but without completely disrupting the scenic, spatial unity that the montage has constructed. Rather, the ‘living’, everyday city seems continually to reorient itself in relation to the city of the dead that has been built at its edges. Similarly, the voiceover gradually makes references to the city; the decline and fall of the city is described, in loving detail, while we are looking at the cemetery. 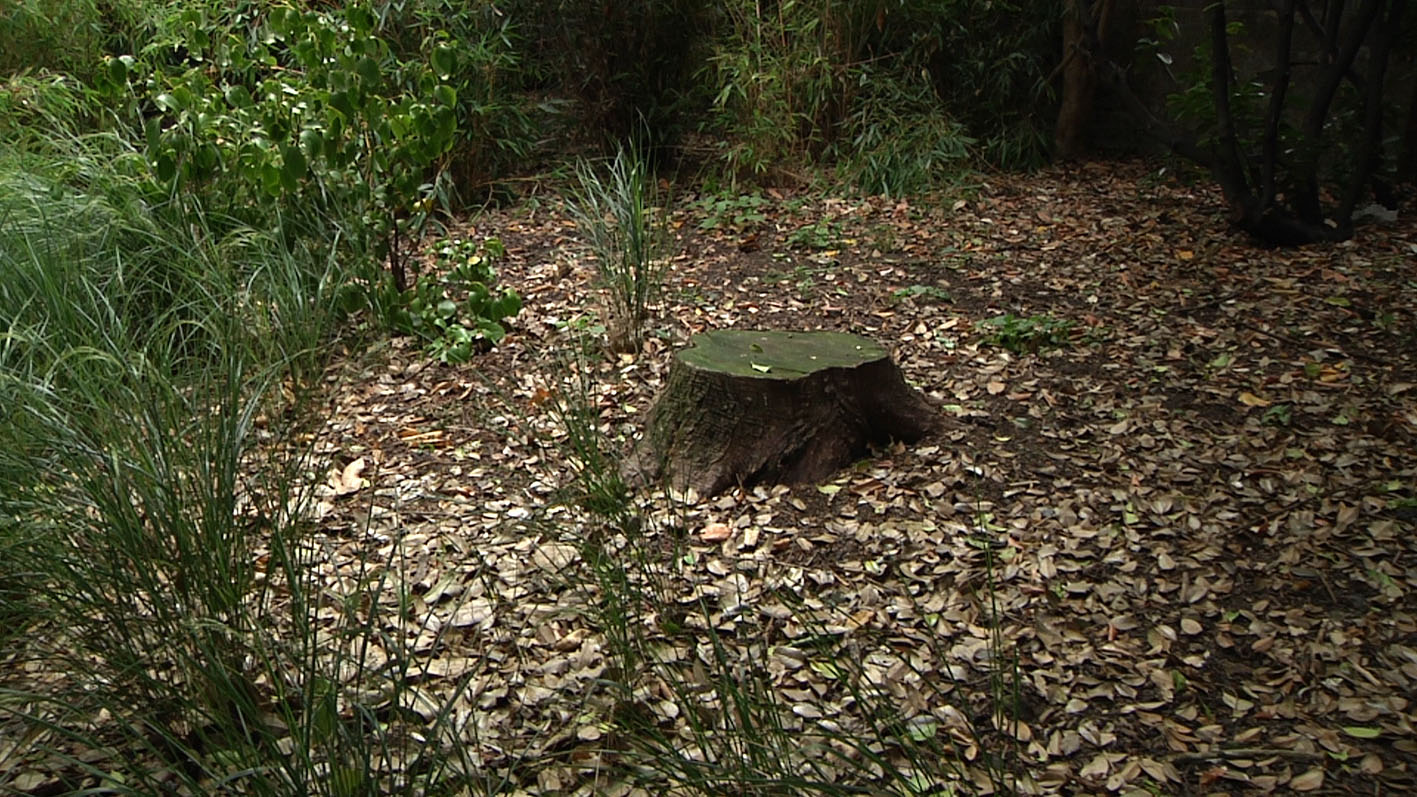 The film began as a film portrait of Belfast, following on from my earlier work NLR, but one in which the city itself is almost entirely absent. It started as an idea after the financial crash of 2008, when work on the spectacular new developments then filling Belfast ground to a halt. Other influences crowded in. A view from a painting: one of the first views of Belfast, a picturesque image of the city cradled beneath the hills that surround it, painted from the site of one of its graveyards. The painting was owned by the city’s richest property developer, who declared himself bankrupt after the crash.

A topography shaped by piles of corpses. 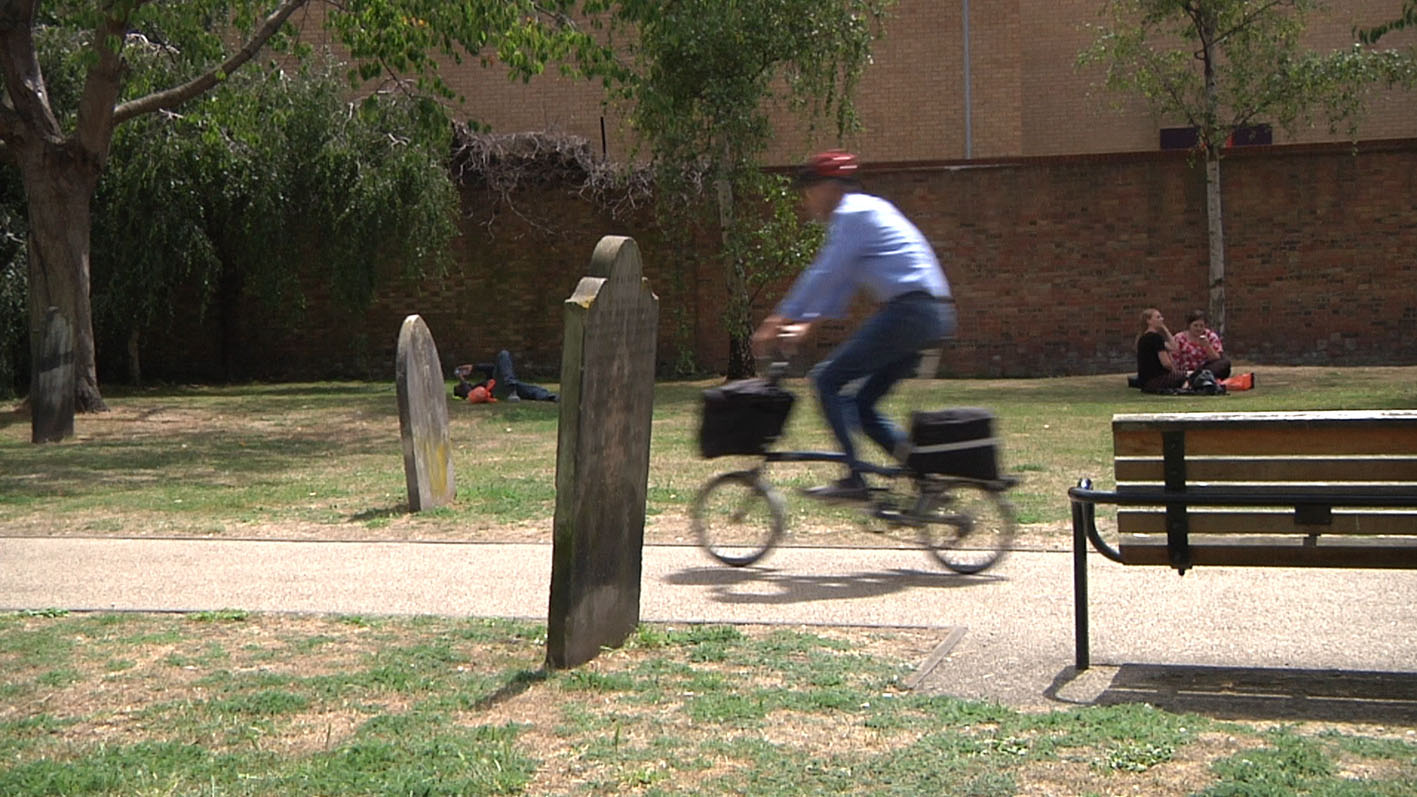 I realised that I was seeing everything in opposites. All my life I have been trying to get away from these opposites, to navigate a space in between, and then I found that my mind was still trying to think in opposites. The city and the cemetery. The living world and the dead. The living world dying, and the dead world flourishing, growing. Simplistic paradoxes. But then I worked backwards to try and unpick this, to introduce some subtlety. What was it about the dead, about death and the city of the dead, and about our parasitic undead city of everyday exploitations and degradations, what was it that was captivating me all this time?

Men in hi-vis jackets and workboots picnic on the grass. 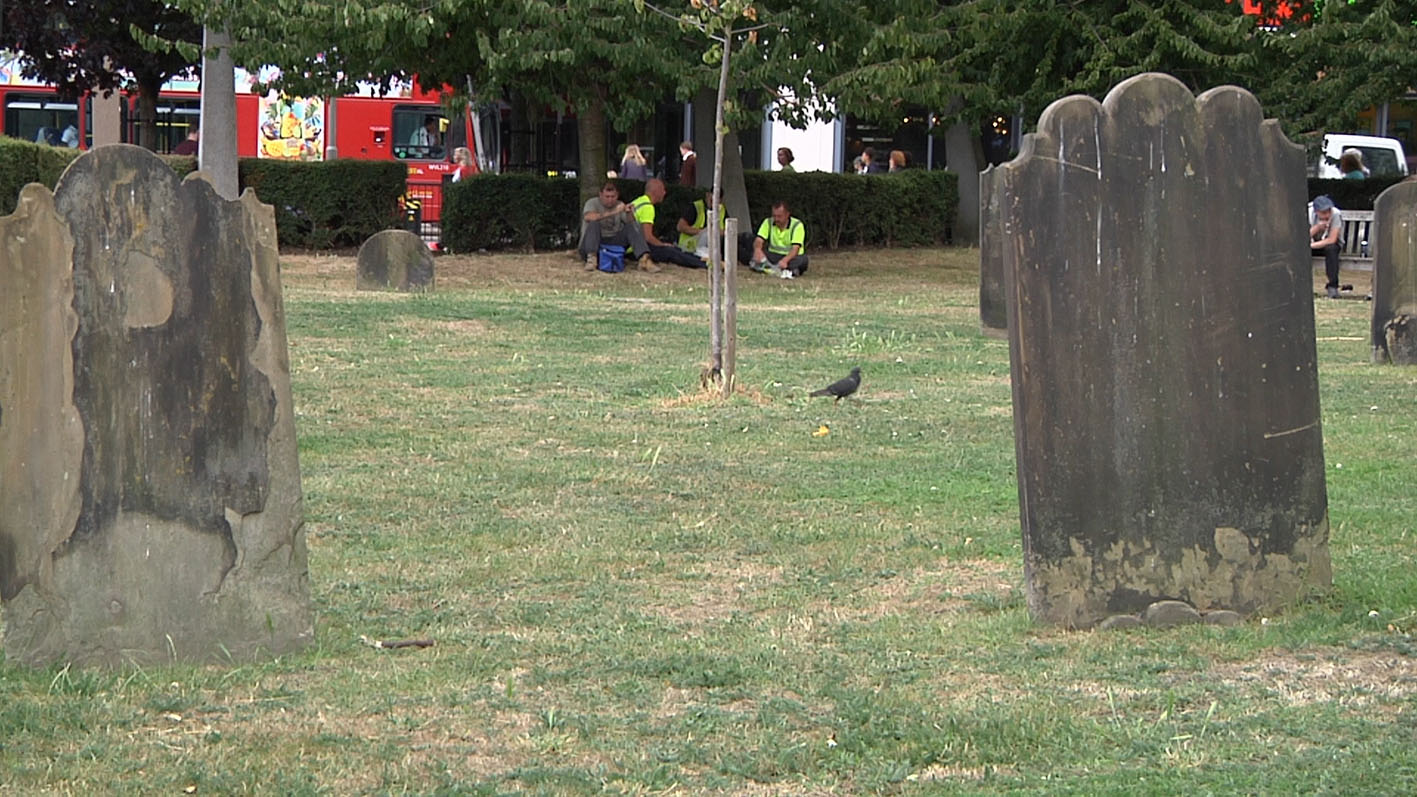 The cemetery is the excess of the city, it’s literally the double of the city; and it’s the guarantee of its death.